Tokuyama’s Formula is a combinatorial result that expresses the product of the deformed Weyl denominator and the Schur polynomial as a sum over strict Gelfand-Tsetlin patterns. This result implies Gelfand’s parametrization of the Schur polynomial, Weyl’s Character Formula, and Stanley’s formula on Hall-Littlewood polynomials — all for

; also, the formula is related to alternating sign matrices. Moreover, Tokuyama’s formula gives a combinatorial evaluation of certain matrix coefficients of representations of

is a triangular array of numbers

such that the betweenness condition

is satisfied for all

. In other words, each entry in the pattern lies between two entries above it. A Gelfand-Tsetlin pattern is called strict if rows are strictly decreasing, that is,

. In other words, the entry equals to the entry above on the left. Similarly,

generic if it’s not left- or right-leaning.

be the number of generic entries. Also, let

, the difference of sums of consequent rows. Now we can state

is the Schur polynomial.

The formula expresses a weighted sum over strict Gelfand-Tsetlin patterns in the closed form as the product of the deformed Weyl denominator and the Schur polynomial. Note that the usual Weyl denominator

is obtained by setting

. In the picture above you can see all the patterns

with the corresponding contribution to the sum. Yellow entries are left-leaning, blue entries are generic. 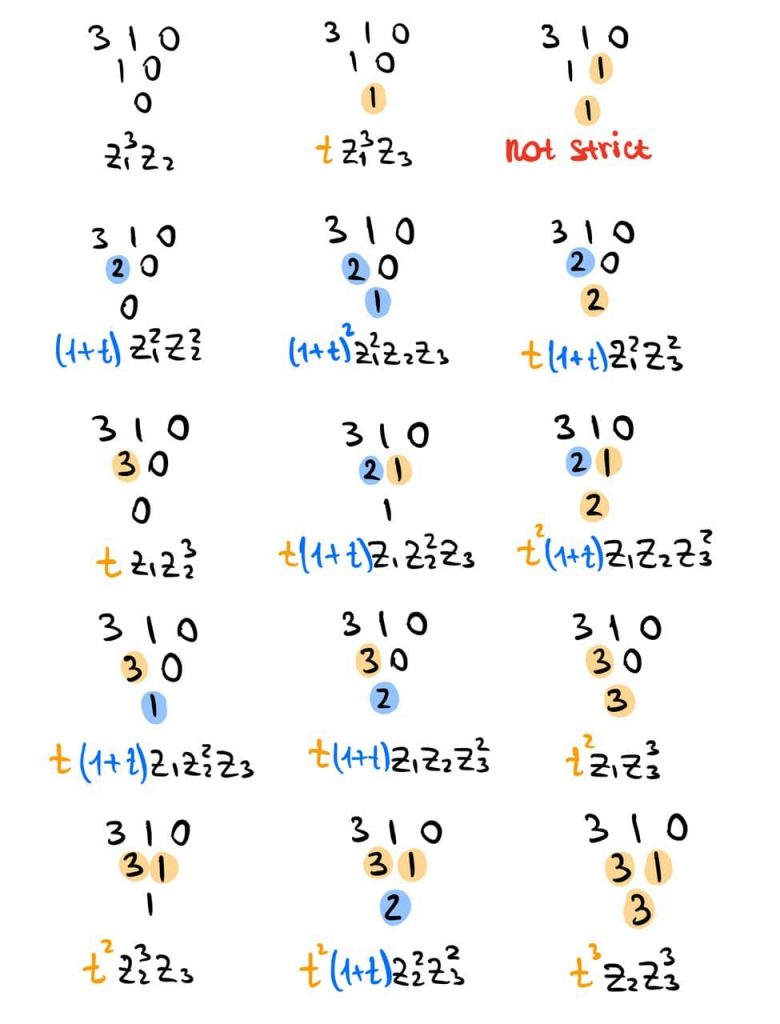 Now, if we sum all the contributions, we get

Beautiful. Before going to the proof of Tokuyama’s formula, let’s have a look at its multiple corollaries.

Sketch of the proof. Set

, then non-zero terms in the sum are exactly strict Gelfand-Tsetlin patterns with the top row

with no right-leaning terms. They are in bijection with all Gelfand-Tsetlin patterns with the top row

be functions from the bialternant formula of Jacobi. Then

Sketch of the proof. Set

, then non-zero terms in the sum are exactly strict Gelfand-Tsetlin patterns with the top row

with no generic terms. They are in bijection with the permutation group

. The sum becomes the deformed Vandermonde determinant since

equals to the number of inversions in

In a similar fashion, by setting

The original proof in terms of characters of tensor products of highest weight representations by Tokuyama is a little hard to read. A better proof can be given in terms of solvable lattice models, but I will show the following short proof by Daniel Bump which is expressed in a more familiar language.

. Note that in a strict GT pattern each row is strictly decreasing, and so it can be written as

Note that each row in a GT pattern interleave the next row. In a strict GT pattern every row

Idea of the proof. Denote the left and right sides of Tokuyama’s Formula by

We will show the following branching rules for

is a vertical strip. Then we show that

, and by induction we are done.

Proof. We start with

. We consider the contribution of patterns

. Removing the top row from

produces a pattern with the top row

and collecting these produces

with a coefficient equal to

. Thus, we proved the branching rules for

. Recall the classical branching rules for the Schur polynomial:

Recall Pieri’s formula in the form

-vertical strip, that is,

times. Collecting everything together, we get that

as above. Next, we notice that

is a vertical strip. Hence, we can write the branching rules for

Finally, we have to prove that

is a vertical strip. The conditions on

can be written as

. Hence, we can write the right side in terms of individual

, then a pattern has a left-leaning entry in the

, a pattern has a right-leaning entry; and in the remaining cases the entry is generic. In the left-leaning case,

, and in the right-leaning case,

. In the generic case,

Tokuyama’s formula is related to the representation theory of

is a local non-archimedean field with the uniformizer

and the cardinality of the residue field

. By Casselman-Shalika formula, the value of the spherical Whittaker function on the diagonal element

. In other words, Tokuyama’s formula can be interpreted as a combinatorial evaluation of the spherical Whittaker function. Now, the Casselman-Shalika formula holds for other groups beside

evaluating the spherical Whittaker function as the product of the deformed Weyl denominator and the corresponding character.

For example, for the symplectic group

, the formula, up to a constant, takes the form

A natural question is whether the formula has a combinatorial evaluation in terms of GT-patterns for the symplectic (and other) groups. For the symplectic group, the answer is affirmative and is achieved by Dmitriy Ivanov using the solvable lattice models. No short proof like the one presented above is known.

For the orthogonal groups the answer is still unknown. In other words, it is unknown how to represent

as a weighted sum over orthogonal GT patterns.

Note that the idea of the short proof above doesn’t work (at least I tried and failed!) for symplectic or orthogonal groups: both the branching rules and Pieri’s rules become not multiplicity-free within the type.